Homeless for three years, Ressurrection Graves vividly remembers the week she slept in her car, waiting for beds to become available at a Washington, D.C., homeless shelter. It was the week of Aug. 23, 2011, when a 5.

Actor Paul Walker, the star of the “Fast & Furious” movie franchise, was killed in a fiery high-speed crash after leaving a charity event on Saturday. He was 40. A 2005 Porsche Carrera GT was “engulfed in flames” when deputies arrived at the scene in Valencia, Calif., at around 3:30 p.m.

Hello. I am not as cranky as this picture suggests. Stick with me and I promise to smile. 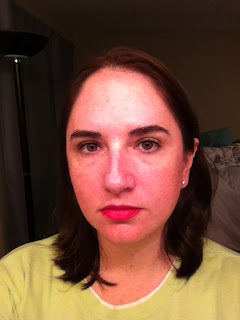 This is my Bitchy Resting Face

A week ago I was in New Orleans for the

— which for brevity’s sake I’ll refer to as WHC.

I stayed at the convention venue: the Hotel Monteleone in the French Quarter. My friend and fellow writer, Eliza Hirsch, shared a room.

I arrived Wednesday night with no trouble–unlike Eliza, whose flight was canceled, but that’s her story to tell. I rode the Airport Shuttle into the French Quarter, checked in to the hotel, dropped off my stuff, and went in search of a grocery store. I was going on an all day tour the following morning and I’d been told there wouldn’t be time to stop for food, so I stocked up on bread, blueberry preserves, peanut butter, and a lot of fruit. There was a minor incident when my bag fell off the counter while I was paying and the jar of preserves shattered inside the bag, but the kind staff replaced the jar and I only had to spend a little time washing blueberry paste off my bananas.

The weather was clear during my excursion, humid, and hot. I assembled my lunch for the next day, had a cocktail in the hotel bar (it spins slowly, hence the name Carousel) and went to bed. 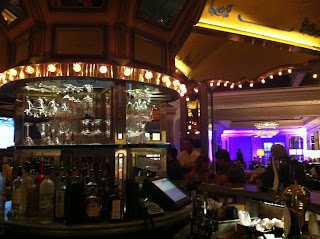 A dim view of the Carousel Bar at Hotel Monteleone 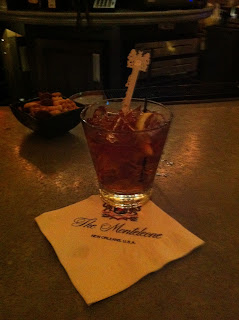 A Vieux Carre at the Hotel Monteleone

Thursday morning I ate breakfast in the hotel restaurant, Criollo–a delicious egg white omelet filled with vegetables and a spicy tomato sauce, plus lots of coffee. Then I caught the tour bus and we headed out to the Laura Plantation. 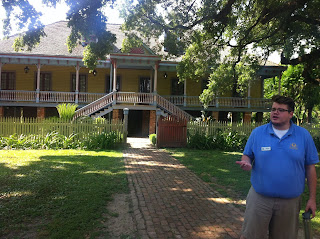 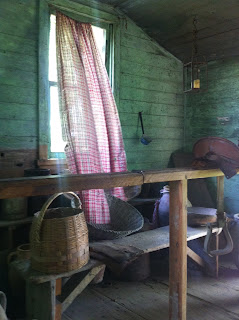 Soon enough we were on our way to the swamp. I had arranged for a six-person airboat tour of the swamp, but lucked out. Only four of us were on the boat. 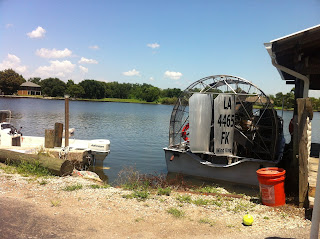 Waiting for my turn on the airboat. Not pictured: slathering on sunscreen. 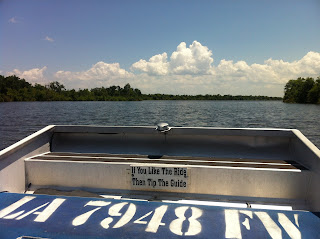 My view on the airboat 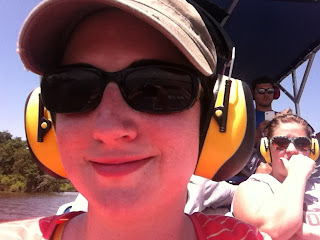 “Airboat Self-Portrait” is the name of my next band 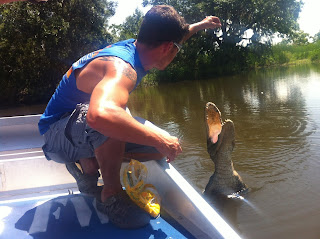 Our guide feeds marshmallows to a gator 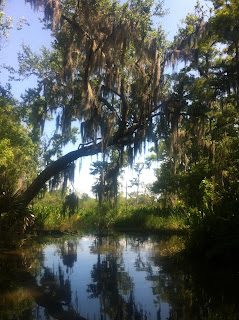 Spanish Moss is not a moss. It is related to the pineapple. 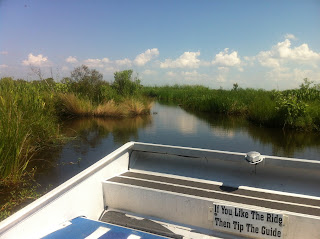 A final stop in the marsh, talking about collecting gator eggs

Overall I really enjoyed the airboat swamp tour. I compared notes with some folks who took the regular flat-bottomed boat and they interacted with more wildlife, but the ride through the swamp was exhilarating.

Time passes. I meet up with my roommate and go on a ghost tour. Buy one Hurricane, get one free… 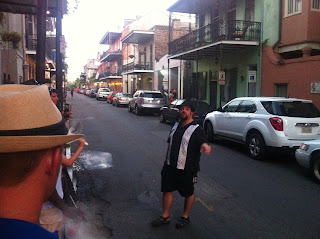 We were in the Beast group 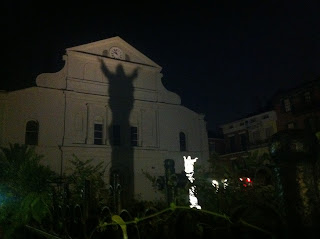 After the tour was over, Eliza and I took a brief walk down Bourbon Street. Thankfully, no pictures exist of that excursion.

The next morning (Friday) I went to a useful workshop about marketing taught by Matt Schwartz. And then I went to panels and readings. 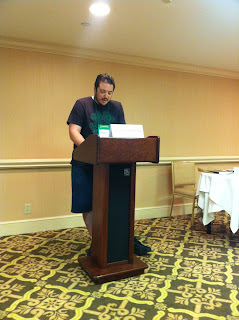 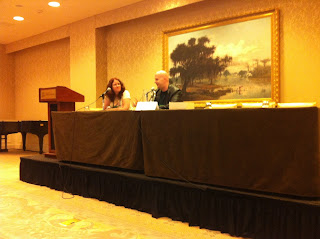 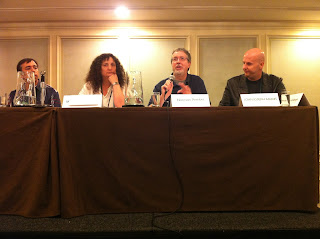 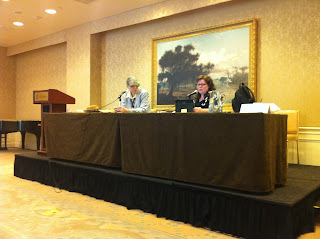 Dinner was at a Paris-style place. I enjoyed the Shrimp Creole and a Bloody Mary. Then I returned for more.

Eliza and I dressed up for the dance. 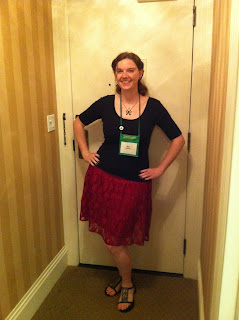 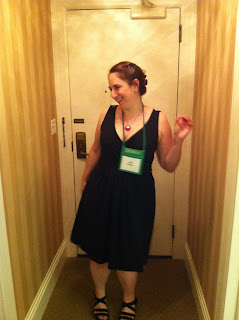 Next day more panels and readings. And a Kaffeeklatsch with Caitlín R. Kiernan. 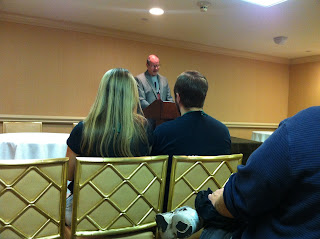 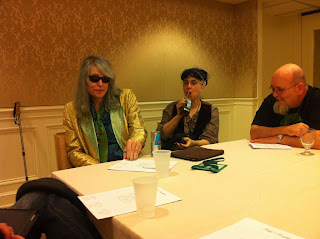 Kaffeeklatsch: Caitlín R. Kiernan (Best two and a half hours of the con)

For lunch I joined a group at Mr. B’s for seafood gumbo and a Bloody Mary. 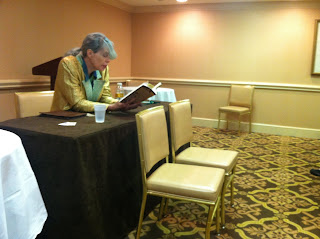 Eliza and I took a break to go to the Voodoo Museum with a stop at the Faulkner House and another for daiquiris. 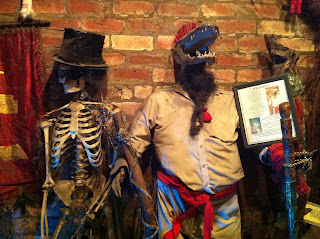 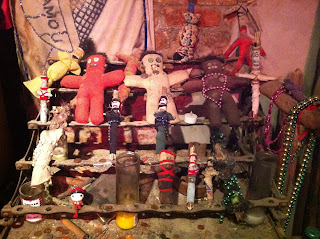 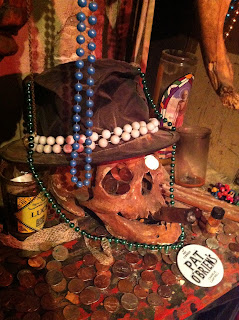 Offerings at the Voodoo Museum

That evening I went to the Bram Stoker Awards, but I was too busy telling jokes and stuffing my face to take crummy camera phone pics. 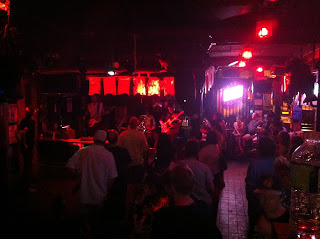 Sunday morning arrived fast. As an aside, I ate almost every breakfast at Café Beignet. Fabulous Cajun Hashbrowns and omelets. 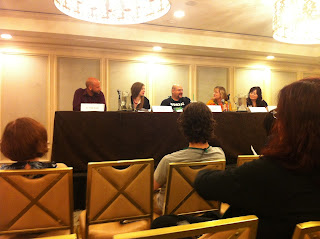 I also went to the dialogue panel but didn’t take a photo. Too busy scribbling notes. 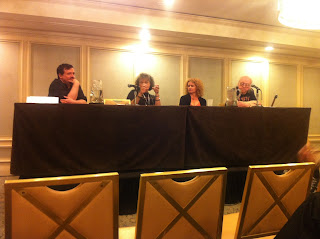 After the closing ceremonies I joined up with some cool people, ate lunch, walked around and imbibed a lot–including a stop at Pat O’Brien’s for a Hurricane. Also, absinthe. 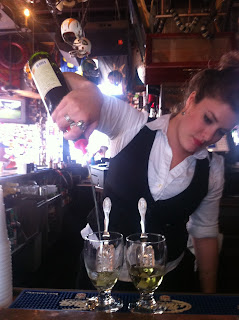 At The Olde Absinthe House, the bartender prepares our drinks 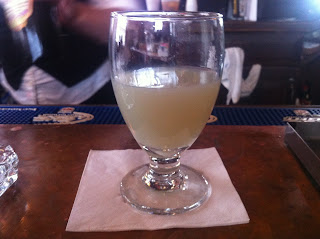 My glass of Mata Hari absinthe. Very tasty. The anise was subtle.

Sunday night also involved a snack at Daisy Duke’s and a lot of packing. Monday morning I caught a shuttle to the airport and had an uneventful trip home.

Can’t wait for next year in Portland, OR!