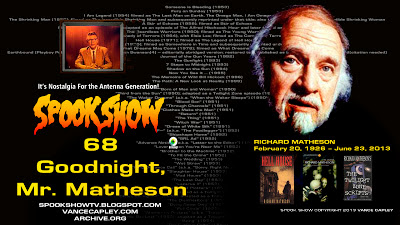 Richard Burton Matheson (February 20, 1926 – June 23, 2013) was an American author and screenwriter, primarily in the fantasy, horror, and science fiction genres. He may be known best as the author of I Am Legend, a 1954 horror novel that has been adapted for the screen three times, although five more of his novels have been adapted as major motion pictures: The Shrinking Man, Hell House, What Dreams May Come, Bid Time Return (filmed as Somewhere in Time), and A Stir of Echoes. Matheson also wrote numerous television episodes of The Twilight Zone for Rod Serling, including “Nightmare at 20,000 Feet” and “Steel”. He later adapted his 1971 short story “Duel” as a screenplay which was promptly directed by a young Steven Spielberg, for the TV movie of the same name.
Matheson was born in Allendale, New Jersey, the son of Norwegian immigrants Fanny (née Mathieson) and Bertolf Matheson, a tile floor installer. Matheson was raised in Brooklyn and graduated from Brooklyn Technical High School in 1943. He then entered the military and spent World War II as an infantry soldier. In 1949 he earned his bachelor’s degree in journalism from the University of Missouri and moved to California in 1951. He married Ruth Ann Woodson on July 1, 1952 and had four children, three of whom (Chris, Richard Christian, and Ali Matheson) became writers of fiction and screenplays. He died at his home on June 23, 2013, at the age of 87.

Matheson’s first short story was published when he was only eight years, appearing in his local newspaper The Brooklyn Eagle. After graduating from high school in 1943 he did a spell of service in the US army, an experience which featured in his 1960 novel The Beardless Warriors. After the war he studied journalism at the University of Missouri, graduating in 1949.

His first novel Hunger and Thirst was ignored by publishers for several decades but his short story “Born of Man and Woman” was published in The Magazine of Fantasy and Science Fiction, Summer 1950, the new quarterly’s third issue and attracted attention. It is the tale of a monstrous child chained by its parents in the cellar, cast as the creature’s diary in poignantly non-idiomatic English. Later that year he placed stories in the first and third numbers of Galaxy Science Fiction, a new monthly. His first anthology of work was published in 1954. Between 1950 and 1971, he produced dozens of stories, frequently blending elements of the science fiction, horror and fantasy genres. He was a member of the Southern California School of Writers in the 1950s and 1960s, which included Charles Beaumont, William F. Nolan, Ray Bradbury, Jerry Sohl, George Clayton Johnson, and others. Matheson appears in two documentaries related to this era: Jason V Brock’s Charles Beaumont: The Life of Twilight Zone’s Magic Man,[8] and The AckerMonster Chronicles!, which details the life of agent and editor Forrest J Ackerman.

Several of his stories, like “Third from the Sun” (1950), “Deadline” (1959) and “Button, Button” (1970) are simple sketches with twist endings; others, like “Trespass” (1953), “Being” (1954) and “Mute” (1962) explore their characters’ dilemmas over twenty or thirty pages. Some tales, such as “The Funeral” (1955) and “The Doll that Does Everything” (1954) incorporate zany satirical humour at the expense of genre clichés, and are written in an hysterically overblown prose very different from Matheson’s usual pared-down style. Others, like “The Test” (1954) and “Steel” (1956), portray the moral and physical struggles of ordinary people, rather than the then nearly ubiquitous scientists and superheroes, in situations which are at once futuristic and everyday. Still others, such as Hell House (1953), “The Curious Child” (1954) and perhaps most of all, “Duel” (1971) are tales of paranoia, in which the everyday environment of the present day becomes inexplicably alien or threatening. “Duel” was adapted into the TV movie of the same name.

Matheson wrote screenplays for several television programs including the Westerns Cheyenne, Have Gun – Will Travel and Lawman.[9] He is however most closely associated with the American TV series The Twilight Zone for which he wrote more than a dozen episodes for[9]; including “Steel” (mentioned above), and the famous “Nightmare at 20,000 Feet”, plus “Little Girl Lost”, a story about a young girl tumbling into the fourth dimension. On all of Matheson’s scripts for The Twilight Zone, he also wrote the introductory and closing statements spoken by creator Rod Serling.[10] He adapted five works of Edgar Allan Poe for Roger Corman’s Poe series including House of Usher (1960), The Pit and the Pendulum (1961) and The Raven (1963).[6]

He wrote the popular Star Trek episode “The Enemy Within”. For Hammer Films he adapted Dennis Wheatley’s The Devil Rides Out (1968).[6] In 1973, Matheson earned an Edgar Award from the Mystery Writers of America for his teleplay for The Night Stalker, one of two TV movies written by Matheson that preceded the series Kolchak: The Night Stalker. Matheson also wrote the screenplay for Fanatic (US title: Die! Die! My Darling!), starring Tallulah Bankhead and Stefanie Powers.

Matheson’s first novel, Someone Is Bleeding, was published by Lion Books in 1953.[4] His early novels include The Shrinking Man (1956, filmed in 1957 as The Incredible Shrinking Man, again from Matheson’s own screenplay) and a science fiction vampire novel, I Am Legend, (1954, filmed as The Last Man on Earth in 1964, The Omega Man in 1971, and I Am Legend in 2007). Other Matheson novels turned into notable films include What Dreams May Come, A Stir of Echoes (as Stir of Echoes), Bid Time Return (as Somewhere in Time), and Hell House (as The Legend of Hell House), the last two adapted and scripted by Matheson himself. Three of his short stories were filmed together as Trilogy of Terror (1975), including “Prey” (initially published in the April 1969 edition of Playboy magazine) with its famous Zuni warrior doll. Matheson’s short story “Button, Button”, was filmed as The Box in 2009, and was previously adapted for a 1986 episode of The Twilight Zone.

In 1960, Matheson published The Beardless Warriors, a non-fantastic, autobiographical novel about teenage American soldiers in World War II. It was filmed in 1967 as The Young Warriors though most of Matheson’s plot was jettisoned. During the 1950s he published a handful of Western stories (later collected in By the Gun); and during the 1990s he published Western novels such as Journal of the Gun Years, The Gunfight, The Memoirs of Wild Bill Hickok and Shadow on the Sun. He has also written a blackly comic locked-room mystery novel, Now You See It …, aptly dedicated to Robert Bloch, and the suspense novels 7 Steps to Midnight and Hunted Past Reason.

In 1993, Matheson published a non-fiction work The Path, inspired by his interest in psychic phenomena.Matheson cited specific inspirations for many of his works. Duel derived from an incident in which he and a friend, Jerry Sohl, were dangerously tailgated by a large truck on the same day as the Kennedy assassination. A scene from the 1953 movie Let’s Do It Again in which Aldo Ray and Ray Milland put on each other’s hats, one of which is far too big for the other, sparked the thought “what if someone put on his own hat and that happened,” which became The Shrinking Man. Bid Time Return began when Matheson saw a movie poster featuring a beautiful picture of Maude Adams and wondered what would happen if someone fell in love with such an old picture. In the introduction to Noir: 3 Novels of Suspense (1997), which collects three of his early books, Matheson said that the first chapter of his suspense novel Someone is Bleeding (1953) describes exactly his meeting with his wife Ruth, and that in the case of What Dreams May Come, “the whole novel is filled with scenes from our past.”

According to film critic Roger Ebert, Matheson’s scientific approach to the supernatural in I Am Legend and other novels from the 1950s and early 1960s “anticipated pseudorealistic fantasy novels like Rosemary’s Baby and The Exorcist.”

ITEM: We have so many cool things happening right now. Please visit vancecapley.com . Thrill Comics #1 is
coming very soon!!! I’m working on it now…but while you wait…why not
purchase a Thrill Comics t-shirt… http://www.cafepress.com/vancecapleydeginsinamerica.869419574 I’ll keep you posted.
ITEM: Spook
Show Comics & Stories, Bear Man #1, BLINK! BLEEDING INK: The
Art of Vance Capley, and MONSTER FROM THE MOUSE HOLE are available for
you to purchase. These print copies of my books look cool! http://www.lulu.com/spotlight/VanceCapley
ITEM: Digital publications are available too… http://www.epubbud.com/user.php?u=vancecapley
ITEM: this one is free…enjoy: http://www.epubbud.com/book.php?g=RVAMU8XT this one is wild!
ITEM: Laughs are awaiting you with Monstrosities…a free online comic…soon to be a book…oh yeah…enjoy http://monstrosities.smackjeeves.com/